On May 8th a daughter, young mother, mother of three and three fellowmen from the Philadelphia Graduate Chapter, Inc. of Groove Phi Groove Social Fellowship, Incorporated gathered together in unity with many other individuals, organizations, and survivors of breast cancer on the Philadelphia Parkway.  The catalyst for this diverse assemblage was the desire to lower the mortality rates for women under siege of breast cancer.  Current data indicates that one out of eight females will be stricken with the deadly disease in their lifespan, and of those numbers, statistics reveal that 1 of 3 African American women, 1 of 4 Caucasian women, and 1 of 5 women of other ethnic groups diagnosed with breast cancer will die from the disease.  Alarming numbers when one takes a moment to consider the percentages and end results.  It was the rumination of those numbers and the current real life struggles of a love one that prompted my daughter and me, to move from annual financial contributors, to active financial participants.  Yet it is the strength of the survivors and dedication of their supporters which has prompted me to share my “Walk for the Cure” experience.

The first thing of note was the weather conditions on May 8th, intermittent down pours interrupted with periods of misty rain driven sideways by blustery winds; conditions that would produce dread within any reasonable person. Nonetheless, as any good soldier can attest, one must be prepared to fight in all types of weather.  Thus, my daughter and I geared up to complete our mission.  We stuffed rain jackets and pants into our back packs, in preparation of doing battle against breast cancer and despicable weather.  With our gear in place we headed to connect with our team.  However when we reached our rendez-vous point, we were faced with the consternation of going it alone; for none of our teammates were present.  Shaken, but unbroken we marched on to the registration station, refusing to let the prospects of going it alone dampen our spirits.  We searched the wall of warriors, located our name received the official and received the race placard.  As a soldier dons his dog tags, my daughter proudly pinned the placard onto her shirt; signaling that she was an official soldier in the fight against breast cancer.

Thanks to our supporters The Fellowmen of The Philadelphia Graduate Chapter, Inc. 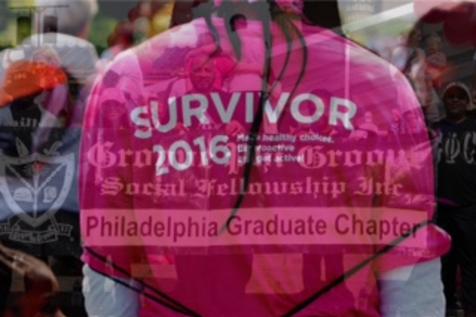 With banner in tow our small band merged with other units, forming several legions of warriors in the battle against breast cancer.  Nevertheless, as we marched onward, I could not help but notice the banners of other units; to the left was a banner imploring women to "Live Life Everyday & Never Give Up the Fight," a sign up ahead encouraged individuals in battle to "Connect, Communicate, Conquer," and to the right a sign proudly proclaimed that their regiment was, "Standing, Supporting, Walking and Fighting with those Fighting the battle against Breast Cancer."  However, one sign said it all, "Supporting the Fighters, Admiring the Survivors, Honoring the Fallen and Never - Ever Giving Up."  In unity and harmony the vast array of groups marched forward with an understanding of what is at stake for our daughters, sisters, wives, and mothers.  Every single participant present on the Parkway that day understood the shadow under which the women we love live; a foul shadow - as real as the one that blanketed the trails and byways we traversed in solidarity.  However, as in any battle there is a turning point in which there is support and hope; the same type of hope and support the Susan G. Komen foundation provides those stricken or genetically predisposed to the disease of breast cancer.  In addition to providing a litany of services to women, The Susan G. Komen Foundation provides a helping hand to tired soldiers and families, seemingly lost on the battlefield.  Their aid reaches behind enemy lines to those held captive by breast cancer and warms the spirits, just as the sunshine that broke through the clouds bolstered and warmed our spirits earlier in the day.  Furthermore, just as volunteers extended water to quench our thirsts during the walk, and celebrated each participant's crossing of the finish line, the foundation celebrates every victor whom overcomes the assault of breast cancer.  Moreover, those cheering remind us that the 5 K Race for the Cure is just one small victory in a war against breast cancer.  Their exaltation reminds us that we must remain on guard, ready to gear next year and the year after, until all women can live without fearing the storm of breast cancer.

Recruitment needs to be done now, not next April or May.  Why now?  Consider the Aesop fable about The Ant and the Grasshopper; in a field one summer’s day a Grasshopper was hopping about, chirping and singing to its heart’s content.  An Ant passed by, bearing along with great toil an ear of corn he was taking to the nest.  “Why not come and chat with me,” said the Grasshopper, “instead of toiling and moiling in that way?”  “I am helping to lay up food for the winter,” said the Ant, “and recommend you to do the same.”  “Why bother about winter?” said the Grasshopper; “we have got plenty of food at present.”  But the Ant went on its way and continued its toil. When the winter came the Grasshopper had no food, and found itself dying of hunger, while it saw the ants distributing every day corn and grain from the stores they had collected in the summer.  Then the grasshopper knew: “It is best to prepare for the days of necessity.” Fund raising goals need to be set now, and reinforcements are needed to replenish diminished resources; for no one knows the location in which the disease will strike next.  After all, the next frontline could be in your front bedroom where your wife or mother sleeps, or in the back bedroom where your daughter or niece bunks down for a night of rest.  In Psalm 27 the writer says it this way, “Do not boast about tomorrow, for you do not know what a day may bring.”  Take action now, if you do not have a team, you can support our efforts by visiting PhillyGradGrooves.com and click on the Susan G. Komen button.  For, one in every three African American women stricken with breast cancer will succumb to the disease.  Enlist now, for no one knows what tomorrow will bring!

Only 1 in 3 Black females will survive Breast Cancer

"Local Grooves Enlist in the Fight Against

will be diagnosed with Breast Cancer during her lifetime.  Unfortunatly of those women of African-American descent nearly one out of every three will succumb to the the disease; a mortality rate which is approximately 9 percent higher than the nearest ethnic group.  Motivated by this knowledge,

support of the women, daughters, mothers and wives we Love. 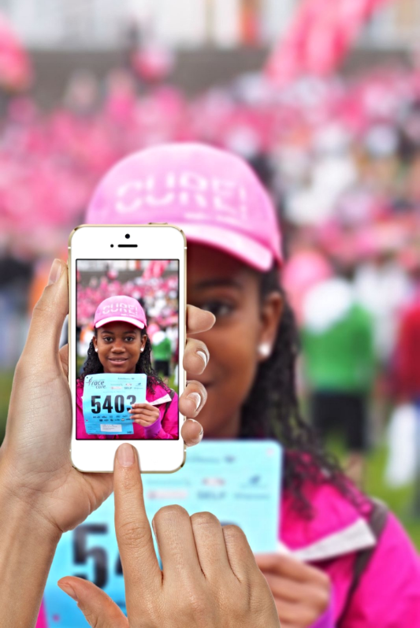 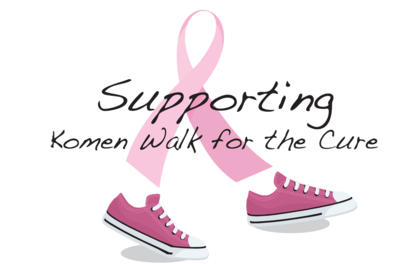 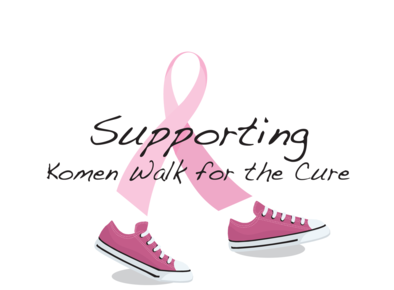 As we headed for the frontline, we received a call from Fellowman Atif, whom informed us that he was in route with reinforcements.  Not only did Fellowman Atif's call lift the cloud hanging over our spirits, it came as the sun broke through the overcast skies; providing us with warmth and reassurance that everything would be okay.  After connecting with Fellowman Atif and Idaly Irizarry-Zayas, we located two more team members (Clayton Graves and Ashley Caldwell), bringing our numbers to six.  Now this number may seem minuscule to many, but to my daughter and I, our numbers had grown from a tiny remnant of those whom committed to walk with "Team Groove" into a small detachment of true warriors.  For we knew that anyone who would gather under the weather conditions of May 8th 2016, were as serious as King David who faced Goliath in battle.  Nevertheless, feeling confident, our small ensemble approached the starting point for the 5 K journey, and proudly unfolded the Philadelphia Graduate Chapter Banner, effectively declaring our commitment in the war against Breast Cancer.