Strong gentle hands are the perfect combination to help shape boys into young men and young men into responsible adults. 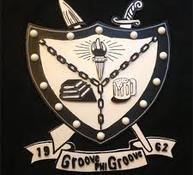 Fellowman Steven Christian is the third child born to Charles and Norma Christian.  “Steve” as he is affectionately known is the proud father of Stephen Wayne Christian and grandfather of Sydney Christian; his only grandchild.

Steve received his primary education within the Philadelphia School System and graduated from West Philadelphia High School.  Upon graduation from high school Steve enrolled at Lincoln University where he became the first member of his immediate family to matriculate in a collegiate institution of higher learning.  While at Lincoln University Steve bonded with like-minded socially conscious men of Groove Phi Groove Social Fellowship and was shortly thereafter initiated as a Fellowman of the Mighty Lion Chapter of Groove Phi Groove.  In 1978 Steve graduated from Lincoln University and began his professional career in the insurance industry.  In 1980 Steve married his college sweetheart Lillian and shortly after their union, were blessed with a wonderful son; Steven Wayne Christian.  Seeking III flexibility in his new role as father and husband, Steve changed employment and began, working in the electrical field with the J.A.E. Electrical Company where he began as an apprentice and achieved the distinction of “Master Electrician” within the span of three years.

In 1992 Fellowman Christian again changed careers.  Seeking to alleviate and address the negative consequences of the crack-cocaine epidemic ravishing the family structure within urban communities, Steve accepted the challenging position of a Juvenile Probation Officer.  Thus, in the midst of the biggest pandemic to strike the Black Community in recent history, Steve entered the trenches to reform youths succumbing to the lust and lure of quick money.  In his capacity as a Probation Officer Steve faithfully served at-risk children encouraging them to accept their past misdeeds and ensuring them that they could reinvent themselves and chart a new path to success.

In recognition of Steve’s success with curtailing juvenile recidivism the management team at the Juvenile Probation Department supported Steve in initiating the Police Probation Partnership Project (P.P.P).  The P.P.P. program was integral in addressing a justice system ill; The Three-Strikes Law, which condemned many black males to long term mandatory sentences for petty crimes associated with lack of economic opportunities entrenched social constraints.  In essence Steve felt that by interfacing with Police Officers to address the root cause of crimes emitting from social need and lack of family resources he could redirect a street level juvenile involved in the drug trade into an employment opportunity and divert criminal charges from entering a youth’s juvenile record.  The P.P.P Program was a success and the outcome was a decrease in juvenile recidivism.  On the heels of the success from the P.P.P. initiative, Fellowman Christian was chosen as the first Probation Officer selected to facilitate the Youth Violence Reduction Project developed under the auspices of Philadelphia Safe and Sound Organization. Specifically, this special unit partnered with clergy, community activists, local business owners, and community leaders targeting juveniles prone to reoffending, dropping out of school, and engaging violent criminal behavior.

Notwithstanding the said accomplishments, Steve is a Deacon at Second Pilgrim Baptist Church, a member of Bethel Lodge #47 Prince Hall Affiliate where he was honored as the National Mason of the Year, a former District Council 47 union delegate, former Stewart of AFL-CIO Local 810, a LifeTime Member of the Fellowship and an integral Fellowman in the creation of the Tri-County Graduate Chapter of Groove Phi Groove Social Fellowship chartered in 2004.

"Men are not perfect, but

they can work toward perfection.  It starts with helping others."