Our Vision is to fulfill the need for an organization of college-educated men who wanted to be trailblazers instead of clones blazing trails created by others.  Our Founders started Groove Phi Groove to promote academic awareness, to create effective leaders and to alleviate social and economic problems, especially those affecting African American boys and men.  Groove Phi Groove has continued to blaze new trails throughout all regions of America, the continent of Europe and Africa.  Our membership now is counted by tens of thousands.  However, size alone does not define us or any other organization.  What defines a non-profit organization is the size of commitment to servicing its target group.  In addition to being trailblazers, Groove Phi Groove is defined by five unique, but key attributes; Brotherhood, Community Services, Networking, Personal Growth, and Fellowship (Family and Faith).

Brotherhood – Groove Phi Groove has an incomparable bond of brotherhood that exceeds what you will find elsewhere.  Many other black fraternal organizations were founded in the early 1990s when few blacks could afford or had the opportunity to attend college.  Thus, many of the organizations created at the turn of the 19th Century portrayed themselves as the elite; replicating a European fraternal model.  Conversely, Groove Phi Groove was founded in the early 1960s, a time of great unrest and change in America.  Furthermore, Groove Phi Groove was founded during a period which would usher in the Civil Rights Act, created by the influence of collegiate organizations encompassing the Eastern Coastline and the Heartland of America.  Those students organizations spoke boldly and truthfully about the need for change, honesty, and inclusiveness.  Some of those bold organizations included Freedom Riders, SNCC (Student Nonviolent Coordinating Committee), The Black Panthers, which partnered with adult-oriented organizations such as the Southern Christian Leadership Conference, The Nation of Islam and the Congress of Racial Equality.  The fore stated organizations defied traditional authority to address injustice in a nonviolent manner to bring about change and inclusiveness for all the nations’ citizens and had a significant impact on the uniqueness of Groove Phi Groove.  Hence the moniker of Fellowship instead of Fraternity, the name Groove instead of a Greek letter.

Everything from our name to our shield stands out as a reflection of the decade in which our organization was born.  Giants of the period such as Rev. Dr. Malcolm Luther King, Nelson Mandela, Malcolm X, Rev. Dr. Leon Sullivan, Medgar Evers, Mahatma Gandhi and Diane Nash, inspired our organization despite being considered radicals by masses who desired to maintain the status quo of oppression and class stratification.  Thus, we are often defined in part by our difference on campus and in our communities.  Yet, despite those differences we composed of like minded individuals who think outside the box to enrich the lives of those in need of support and mentoring.  When you join Groove Phi Groove we will stand beside you at all times; when you get married, go to the hospital and even when you undertake your final journey to paradise.

Community Service – More important than who we are, is what we do.  We exist to serve others; especially young black men seek an education.  Our signature community service program is The Groove Leadership Academy, whereby our graduate chapters adopt a high school in order to mentor and provide scholarships to juniors and seniors.  We use our 501 ( c ) (3) IRS charitable arm, The Groove Fund, to provide scholarships to college and college-bound students.  Our work to increase the number of strong black men in America is a defining characteristic of who we are.  As our Past National President John East, Jr. stated, “Positive interaction, generally brings about understanding, learning, growth, and togetherness.”  In other words, we realize that it is not enough to just become a member of Groove Phi Groove, without embracing community service.  The primary reason for becoming a Fellowman of Groove Phi Groove is to become an activist on your campus and community; a catalyst for effectuating positive change.  If you want to help African-American boys become men and empower the black community by participating in voter registration drives, Health Awareness campaigns and the fight against illiteracy then you are for us and we are for you.

Networking – We also believe in helping ourselves.  We have members who are lawyers, ministers, doctors, and elected officials.  Having been around only since 1962, we have a number of brothers who have matured during some of the nation’s worst social crisis (Jim Crow segregation), the Vietnam War and the Crack-cocaine epidemic.  Thus, we have firsthand experience in helping individuals overcome Post Traumatic Stress Disorder, drug addiction and the harsh effects of diseases like as Hepatitis C and HIV.  In addition, we aid members who have experienced the pain and misfortune of addiction, loss of loved ones and unemployment.  We never deny or turn our backs on you when, not if, you fall on hard times because hard times is like a shadow when follow and overtakes everyone sooner or later.  Thus during good times or bad, to find the help you can access Project Grooves Associated in Networking.  Looking for a lawyer?”  Need counseling, a job lead or prayer?  Trying to figure out what to do after college?  Or, just looking for a brother to hang-out with when you are on the road?  Tap into Project Gain to access thousands of brothers nationwide, who will give you their time, energy and knowledge to help you become a better man.

Personal Growth –  If you are already a leader or want to become one, or if you simply want to grow and develop then Groove is for you.  As a relatively young organization, there is still room for all types of men, no matter where you are on your personal journey.  We believe all Grooves are equal, no matter what age, financial class or hew of skin.  We all learn from one another.  We will never proclaim that you need us more than we need you.  We want and need energetic and visionary men to be regional officers, start new chapters, or to join an existing one.  We are always looking for new leaders or further develop existing leaders.

Fellowship, Faith, and Family - The Fellowship in Groove Phi Groove stand for what we do.  Whether you are a Groove in New York, California, Ghana or England, we like to fellowship with each other and our families have fun and our brotherhood.  We hold an annual meeting called Conclaves in places all over the country, sponsor family picnics, attend church and do other family-oriented activities too; Grooves are multidimensional.  There is no such thing as a typical Groove.  From white to black, we encompass the hold spectrum of the color as our colors indicate. 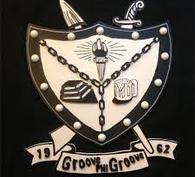 Groove Phi Groove Social Fellowship, Inc. was founded at Morgan State College in Baltimore, Maryland on October 12, 1962, by 14 young college-age men (three now deceased); all of whom are as close today as they were over 50 years ago.  These forward thinking men established our mission to educate and empower the people within communities for the betterment of mankind, especially young black men.

To Learn More About Our History, Visit Our National Website

"We Have come this far by faith."