~This essay was originally written for Customers Bank who selected Tina as one of their four-year $20,000 (total) Scholarship Recipients. 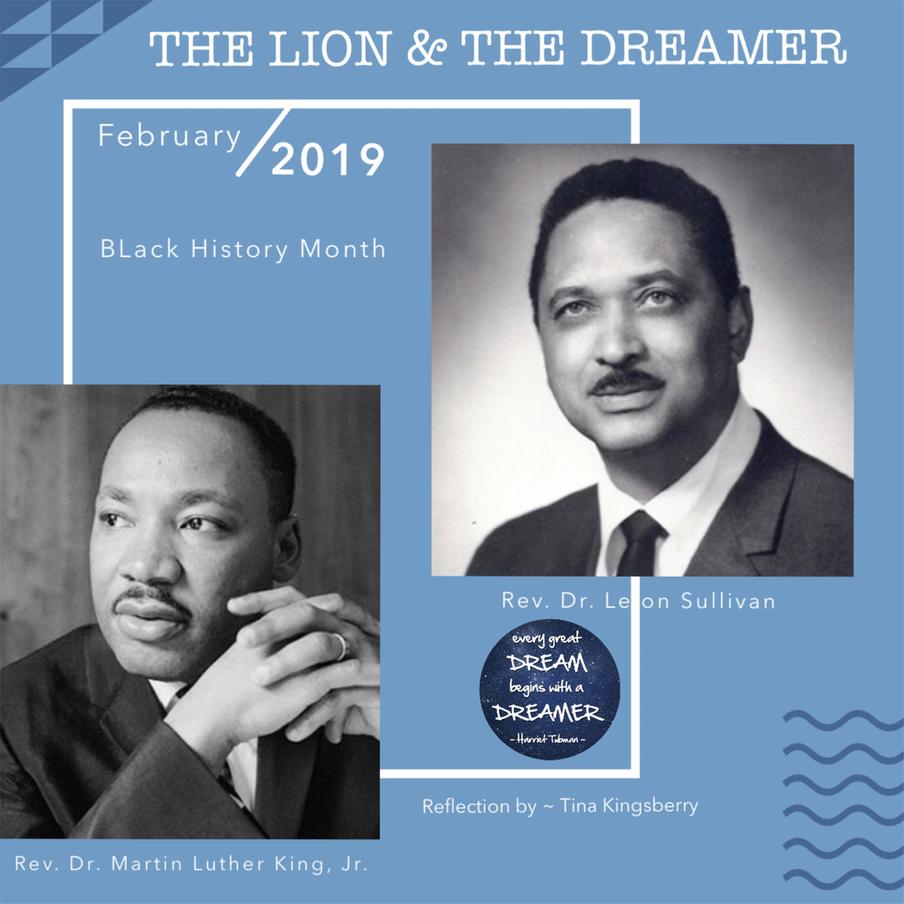 The Lion and the Dreamer, Agents of Change

One day a farmer, walking down the street in a small town came across a large stone in the middle of his path. The farmer complained: "Who could be so careless as to leave such a big stone on the road? As he walked around the stone he said to himself, "why doesn't someone remove it?"  The next day, the same thing happened when the milkman came upon the stone. He too went away grumbling but left the stone as it was.

A few days later, a student came across the same stone. Worried that someone may fall over it and hurt themselves, he decided to push it aside. He pushed long and hard but made little progress. Slowly those who watched his heroic effort came and helped. Although not easy, together they managed to clear the path for others to traverse the road safely. Later that evening as the student made the reverse trip home he noticed a piece of paper on top of the stone. Intrigued he picked up the paper and read the following message, "You are the true wealth of our community and strength of our nation." The note was written by an elderly woman who desired change but lacked the strength to bring about change needed. The moral of this story highlights two kinds of people Talkers and Doers. Reverend Dr. Martin Luther King, Jr. made the following proclamation, "Cowardice asks the question - is it safe? Expediency asks the question - is it politic? Vanity asks the question - is it popular? But conscience asks the question - is it right? And there comes a time when one must take a position that is neither safe, nor politic, nor popular; but one must take it because it is right." Talkers merely talk, while Doers are Agents of Change.

The Reverend Doctors Martin Luther King, Jr., the Dreamer, and Leon Sullivan the Lion of Zion were men of action. Both were agents of change who believed the following "truths to be self-evident, that all men are created equal, that they are endowed by their Creator with certain unalienable Rights that among these are Life, Liberty and the Pursuit of Happiness." Moreover, they saw segregation as a stone in the road, which impeded people of color from achieving the American Dream. Thus, they dedicated their lives to improving the lives of others by removing barriers that impeded the nation's founding fathers' vision from being fulfilled "one Nation under God, indivisible, with liberty and justice for all.” However, unlike the visible boulder in the story above, the residue of black codes was a seemingly unmovable boulder covertly hidden behind a transparent wall of racism, which many found impossible to remove.

While many like W.E.B Du Bois and Marcus Garvey focused on examining and circumventing the barriers of racism. Agents of change like the Reverend Doctors Martin Luther King, Jr. and Leon Sullivan focused on removing obstacles, they pushed and placed pressure on the system of racism until the road was clear for all citizens to traverse and pursue the American Dream, without regard to race, gender, religious affiliation or sexual orientation.  Despite their achievements, a residue remains behind like a stubborn stain on a freshly laundered garment, for my generation to clean.  At an arm's length, the blemish is barely visible to the naked eye.  However, upon close inspection, and to the wearer, it is apparent and a cause for uneasiness that makes the wearer self-conscious. To illustrate the point, let me share my "Swag Story."

The story is true, the setting is my school and the era was 2008, my Second Grade school year. "Tina, what is the definition of swag?"  Easy enough, all students of my era who listened to the Black-Eyed Peas knew the meaning of swag. With the gusto of Fergie from the Black Eye Peas, I informed my private school teacher that "swag is style." My teacher's look implied that I was way off the mark. Seeking to add a reference to my definition, I began to recite my favorite rappers Fergie's lyrics in her distinct vernacular, "I like that boom boom pow, them chickens jackin' my style! They try to copy my swagger."  “NO, Tina, No! Swag is a curtain or piece of fabric fastened so as to hang in a drooping curve!”  Although subtle, my teacher's cultural correction not only mortified me but stymied my enthusiasm. Subconsciously, she violated the Roman literary and philosopher Marcus Tullius Cicero's rule about communication, "We should be as careful of our words as of our actions."

In seeking to understand why my teacher could not grasp my definition of swag, I became keenly aware of our cultural differences, nuances, and inflections between my predominantly white school community versus that spoken in my predominantly black community. Nevertheless, by the eleventh grade, I had encountered many more of these dissonant experiences. As a young learner, this affected the way I saw myself and inhibited me from freely contributing during classroom discussions. I possessed a deep-rooted fear of being judged for saying things that would put me in the black stereotype box.  Realizing that tears, inaction, and silence would not solve the problem, I reflected upon one of Reverent Dr. Sullivan's favorite stories my father would share with me and other Sunday School students, the story about the Balloon Seller. The main protagonist is a poor boy who watched children buy colorful balloons, which upon being filled with air and tied to a string flew high among the treetops.  Unlike the other little boys, this boy's family was poor and he did not carry money with him. Thus, he had to go home. By the time the little boy returned with the money, all the colorful balloons were sold and only a black balloon remained. Dejected the boy asked if the black balloon would fly. "Of course, said the Balloon Seller, it is not the color of the balloon, but what is inside which makes it soar." Then he added, "without the string to keep you grounded you will forget who you are and become lost." In my quest for enlightenment, I channeled the wisdom of Reverend Dr. Leon Sullivan and embraced Reverend Dr. Martin Luther King, Jr.'s dream of a day where children will "live in a nation where they will not be judged by the color of their skin, but by the content of their character." Therefore, instead of selecting lecture-based classes like American History, that relied on regurgitation of presuming facts, I pursued classes that promoted open dialogue and collaboration.

Nonetheless, my breakthrough occurred while attending a church service in which my mother's friend signed several songs.  While mesmerized by the kinesthetic emotion which her hand gestures emitted as she spoke to those with no phonetic voice, I had an epiphany. My voice was just as silent as the audience my mother's friend sought to engage. At that moment, I realized that there are people amongst us, like the deaf members of the church that people don’t ever think about and yet they are making contributions every day. I thought about the fact that located two blocks from my school is a deaf school, that contributes to the neighborhood and community, yet their perspectives and stories were unknown to my school. Encouraged by this awakening, I started an American Sign Language Club as a vehicle for my school community to look at diversity and explore the cultural nuances of language. My aim was to build a bridge of connective collaboration to remove barriers.

Collectively the teachings of Doctors King and Sullivan, along with experiences like that expressed in my swag story, have served as the nexus behind my passion of working with overlooked communities and fuels my desire to build bridges which allow for a holistic approach to improving the quality of life for all people. This passion was cultivated and enhanced via participation in programs such the student Anti-Defamation League, Independent Schools Diversity Leadership Committee, student Red Cross Committee and enhanced by participation in Model United Nations where students from around the globe come together each year, despite their native languages to discuss the problems facing nations and communities around the world; problems such as water shortages, lack of affordable housing, and lack of fertile soil. As an aspiring science major, I believe an inclusive and collaborative approach will allow for the development of sustainable solutions to world problems. It is my desire to use my talents like the Reverend Doctors Martin Luther King, Jr. and Leon Sullivan to remove social and economic obstacles which hinder people from achieving the American Dream, no matter where they live on earth.